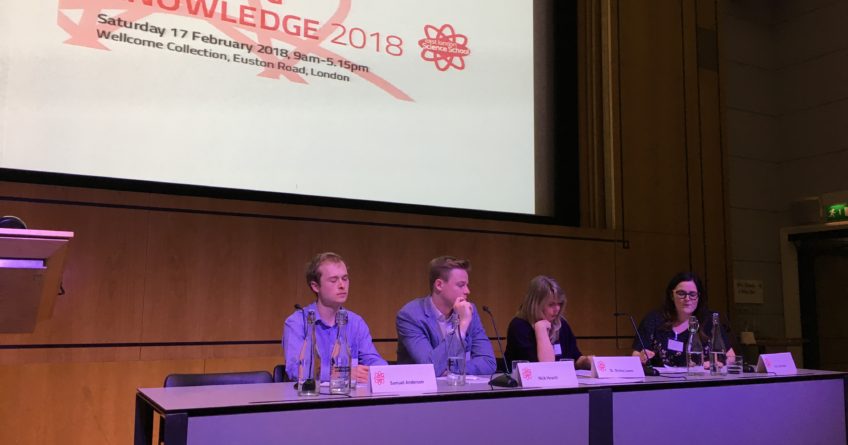 Choosing Knowledge 2018 was a great success. We hold the conference every year to give voice to the ideas that lie behind the East London Science School and contribute to the debate about the importance of knowledge-led education. There is no doubt that we continue to punch above our weight and provide a reference point for anyone involved in working out which way the arguments about education should go.

I opened the conference with a plea to participants to engage in a real debate about the future of knowledge-led education amongst friends. There is no doubt we did that and allowed a range of views to be aired. We are not shy about tackling thorny or controversial subjects. I am proud of the contributions so many of our staff played in pulling off this event.

To see so many of our teachers take to the stage to tackle the issues at the heart of how education is understood today, often alongside national figures in education and to see them hold their own is wonderful. We are building a brilliant team of young teachers who are capable of contributing much more to education in the UK in the future. I was particularly impressed by Samuel Anderson our head of classics in his first year of teaching and already sounding like he is on the way great success.

But we didn’t all agree with each other. In fact, for the first time we had real disagreement within the conference. This is indicative of how the debate amongst educationalists is shifting rapidly even within the knowledge schools community. But it is also a measure of our capacity as a school to deal with the clash of ideas in a public arena. This is particularly refreshing in the educational sphere. There are very few schools who would be prepared to see their ideas debated and challenged freely in public.

I was lucky enough to share a platform with Alka Segal-Cuthbert and Ben Arscott to discuss this contentious issue. Alka has researched the influence of neuroscience on education and has a convincing take on the irrelevance of the evidence from this field on educational practice. My take on this is more a philosophical critique of the basis of cognitive science as a means of understanding how the mind works. For me, a theory that can not understand consciousness and human thought has little to tell us about education. In fact, as currently proposed the ideas of cognitive science are if anything an attempt to impose a natural limit on what pupils can achieve. This is best exemplified by cognitive overload theory very much in vogue at the moment. As such, these ideas are likely to inform a more limited aspiration for what a knowledge-led school can offer its pupils.

The paradox which I have feared for sometime is that knowledge-led schools could become the ones that entrench a limited view of the curriculum and what children can achieve.

Obviously, as Ben argued, the proponents of cognitive science see this in reverse saying that by adopting teaching styles in line with the natural limits of a pupil’s ability to acquire knowledge then we will be able to achieve more.

This is where I see the battle ground for the heart and soul of education emerging over the next year or so. I am pessimistic about the outcome of such a battle as the pressure to make gains politically in education will mount and the scope to escape a consensus will die away. We already felt the impending storm at the edges of the conversations over the course of the conference.

Thankfully, the team we have built are now able to confidently hold their ground. They are genuinely subject focused or as was explained at the conference focused on the “what” not the “how” of teaching and for good reason. The pressure to drift from “what” to “how” is mounting day by day. I have attended several meetings run under the auspices of gathering knowledge based educators together recently. On each occasion the “what” barely gets a mention.

Finally, I was really pleased that we were able to push back on questions most teachers would be scared to address. It was riveting to hear from Tony Sewell, Rania Hafez and Tarjinder Gill look at the question of “Whose knowledge is it anyway?” They dealt with the impact of the movement to decolonise the curriculum is beginning to have in schools after playing out disastrously across US and UK campuses recently. Their steadfast defence of universal knowledge was refreshing. That debate continued well into the night.

Podcasts from the conference will be available to download soon.